This is an industry that is one of the most wasteful around, a typical movie shot on location involves a fleet of vehicles, most of them are larger and few carry more that one or two people getting to and from, not to mention generators and catering trucks, and of course all the crew and talent drive solo to and from, not much green there.

Then lets look at the waste from set building – on location entire towns are built as facades and then scrapped, even in the studio sets are built then scrapped - this is green?

So what is the agenda for this summit?

How to reduce consumption of resources?

How to use energy efficient lighting and reduce air conditioning and power? Don’t bet on it, you won’t see any CFL except as props on camera - this is an industry that considers a 1000 watt light bulb as the smallest instrument in the grip truck

How to minimize crew requirement during production? Don’t say that in front of a union member

There is a partial sentence discussing “…implementing environmentally sensitive practices in both day to day business operations, reducing reliance on nonrenewable energy sources…” and that’s the extent of practical “in-house” green for the industry

So what exactly is the main focus of the seminar?

Why, how to “…deliver persuasive environmental messages in film, TV, cable and music to influence consumer awareness” of course!

Green Marketing and Advertising for film and TV

On the Green Front, Pitching and financing Environmentally themed films
(yes, I know - but that’s what the invitation says)
Which reminds me, when does “The 11th Hour” hit the DVD market?
And how many acres of forest did the production lay waste to?

Special Events, Party Planning and travel
(very important subject for this crowd but I don’t see any green except for $’s)

To be fair, there are also topics on:

Fuel saving and energy efficient vehicles
(I can see it now - chase scenes where the good guys in a Prius run rings around the bad guys Hummer? – “Mr. Director, I’ve got a slight suspension of disbelief problem with this chase scene…”)

Reducing Energy Consumption and Renewable Resources (- this crowd? They might use recycled paper – as long as it has a stamp saying so and some bean counter may put in motion detectors on the lights so someone has to “prairie dog it” every time the motion sensor times out – or better yet, shut off the AC during a long weekend – without shutting down the server farm)
Posted by OccamsEdge at 17:09 No comments:

Again, for those of you who live where decent public transit exists this will seem to be an extreme example of indulgence but the simple fact remains for almost any California kid, particularly those of us who manage to live in the more rural areas, wheels are a necessity. And since this is, after all, California, image runs a close second.

So just any wheels won’t do (unless, like your humble Scribner you realize practical realities override primal needs to ‘go fast’ & be cool, not that I’m immune to those mind you, but sadly there are limits to budgets).

It should reflect some aspect of its owner - which has lead to months of searching and anguish attempting to find ‘the car’ for those squalling aliens that grew in to my offspring. For daughter it was more a matter of enforcing the budget and being patient enough to wait for the right ride (seeing a new Eclipse spyder elicited the gushing “…this is so my car” which was squelched with “…its so not your budget…”

Son, the rockgod in training wanted a hemi, preferably ‘68 to ‘72 vintage Charger, erm, price one of those, running, in California recently? 50k and up! After many test drives including a ‘01 cobra (awesome car - even if it looks like a mustang, it doesn’t drive or sound like one – however, “too preppie” was son’s verdict) back to searching – since son has shown some mechanical aptitude and willingness to get greasy search criteria was more on potential than current condition.

The first car son ‘really, really’ wanted was a ’68 Camaro set up for drags - including fuel shut off, kill switch and the ever important front break lock switch (required for burn outs, don’t cha know?) while the back seat was still there (why?) it was accessible only by contortionist midgets due to the roll cage, while getting in the front was not too bad, getting out without crawling to the ground on was a bit of an exercise for this aging bod and while it had a strong engine there were no wipers, headlights or heater.

OK so, I’ll concede a few points for cool, practical – its not

Finally, stumbling across this beast 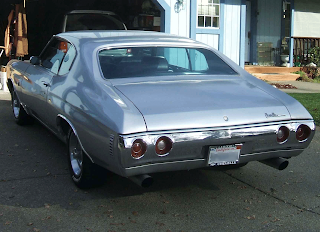 While not my cup o tea (prior to children there was a long list of two seat sport cars and motorcycles) and it is a nice example of a (now) classic street rod. It looks somewhat ominous sitting there and when you fire the beast up, everyone in the area is looking for the source of the rumble - and the sound of that big V8 doing its thaing (yes, it does bury the speedo on the fast side with no difficulties) is awesome to behold!
Posted by OccamsEdge at 20:42 3 comments: