One of those moments that anyone who was there and survived will never forget where they where or what they were doing.

Some were sitting in the rare sun at Candlestick Park for the first “Trans-bay World Series”.

Some were on the Cypress freeway or on the Bay Bridge or down in the Marina and were not so lucky.

I was sitting in the drivers seat of a GVG 1680 in control B, in rehearsal for the telecast scheduled the next morning. Which to date is the only air date I’ve missed in several decades of whatever it is that I do to collect a paycheck

The first indication was the rumble that was as much felt as heard then the real shaking began, I watched as the program and preview monitors (20” Conracs) slide to the ends of their rack slides and start trying to shake themselves loose, shortly followed by several structural failures making themselves evident by the noises, around this time I decided that I was not in a very good position and moved to the sound door- with it’s reinforced frame, it seemed to be the optimal place to ride the rest of the rest of the shaker out.. As I was surfing the floor I watched as a coffee pot levitated to the middle of the hall before gravity reminded it – around the time the initial shock wave passed the power spiked and died – and I got the chance to do something that I fantasized about during more than one long rehearsal or edit session, pull the main building breakers conveniently located just outside the control room.

After the shaking stopped we started getting everyone out of the building, one person was trapped in the green room (why is it called a green room? They’re never green…) when the header above the door failed, he threw a chair through the window and followed it out. Several people were still sitting at their desks stunned. In the meeting rooms large monitors had fallen to the floor along with most of the ceiling tiles and fluorescent fixtures through out the building.

In the stairwell was an 18” dagger of glass, embedded in the sheetrock - deep enough that it would have de-limbed anyone unfortunate to impede its path. Bits of glass were embedded in trees and the ground around the building, across the courtyard & pond there was a restaurant with glassware stacked 3 high that didn’t loose a thing. The worst injury in our building was suffered by one of the guards who was struck by parts of the ceiling.

As much as any single event can this one marked a definite turning point in what ever the heck it is I do for a paycheck, as I kicked off the SMPTE (that’s the Society of Motion Picture and Television Engineers of which I “r1”) meeting a few weeks after the quake (this is the genuine pocket protector crowd, although these daze you’ll see pocket PC’s, thumb drives and memory card readers as well) “…5 oh 4 pee emm, October 17th a new opportunity for facilities design occurred…”

For the better part of the next 3 years we were the “techno homeless” as the building was unusable (in fact, had it been almost anywhere else it would have been bulldozed but as it sat on some of the more expen$ive bits of real estate in a community where it would never be allowed to be rebuilt the decision was made by the owners to “re habilitate”) along with other reasons we would not be rebuilding in that location.

Of all the equipment in the facility, most of which was “turning and burning” at the time the only losses were the Fuji & CDC drives for the Quantel PaintBox and Still Store (these were the whopping 160MB, 7 rack unit, 100lb beasts and the removable 80MB ‘cartridges’ respectively - both of which were notoriously sensitive) 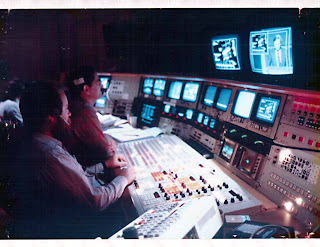 the “vision mixer” as my brit fellows refer to them in Control A, the last of the great analog live production switchers - the Grass Valley Group 300 was damaged in one of the Mix/Effects banks by one of the JBL 4412 that dropped off it’s Omni mount but aside from these and a few lighting instruments that got damaged surprisingly little else was lost – until about a 6 months later and I was putting together a temporary facility (in parts of the Labs building, don’t know of many edit suites with D.I. water and various gas lines) and since I had lots of parts, set up the audio portion of the suite with a Bi-amp’ed monitoring (over kill for the application but what the hey). When I fired it up there was no bass, thinking I had made a mistake I checked the wiring, changed amps before I finally pulled the grill cover off of the JBL’s – where the 12” drivers should have been was two wires dangling… we had 4 pair of these - all of which were missing their woofers after being in temporary storage (in a superfund cleanup site – our future home) under guard from the rent a cop agency several of which had ‘toy trucks’ with really good subwoofers. 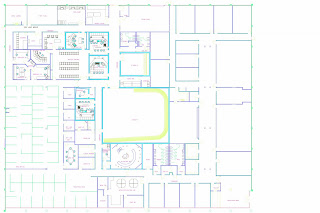 There is a lot more to this story, on the personal side I was attending law school in the evenings and working on my second pass at the baby bar - scheduled a month after the quake – which got put on indefinite hold as I had started it as a self imposed challenge and a stretch and now I had more than enough to do - like several temporary – borrowed – rented facilities and storage spaces, doing the old ‘Glom and devour” on several smaller operations within the company – the above noted superfund clean up site and how we ended up building a unique, highly usable “state of the art” facility - in a high rent district that was disassembled 5 years after it was commissioned.
Posted by OccamsEdge at 14:04 No comments: